“When you demand nothing of the world, nor of God, when you want nothing, seek nothing, expect nothing, then the supreme state will come to you uninvited and unexpected.”
– Sri Nisargadatta Maharaj

For five hours we drove through rice paddies, lush rolling hills, and tea plantations, and what was a trip down memory lane for my father, was intense déjà vu for me. A flood of memories from dreams rolled into my mind the closer we inched towards the Butterfly Mountain, Sri Pada. I remembered all the sign posts, the serpentine roads, a battle of evil vs. evil where evil prevailed. Riding a white-winged unicorn and an elephant, the good retreated in defeat, vowing to return … The dreams were so vivid, I had totally been here before, but I hadn’t…

We finally made it to our Guesthouse at the base of Sri Pada, and the energy was incredible. There was something so fresh and strong, you could feel it walking on the ground, breathing in the air, the silence of peace flowing from the river just beneath our room. Despite the cold rain, it was like there was a warm fire kindling my core, I felt absolutely amazing.

I took the rain as my cue to nap. After a few relaxing breathing exercises, I opened my heart to the silence of the valley…

Whether it was the fact that my body, mind, and spirit simultaneously reached a state of deep release (or I was exhausted), but something happened… In the stillness and silence of the valley, I was guided and floated through to a long forgotten past thousands of years ago.

We were here at the site of Sri Pada, though the landscape has significantly altered since … There were high peaks everywhere. There was a peak directly behind Sri Pada that was even larger, it reminded me immediately of Huayna Picchu … This was one of the first colonies on Earth, and it was an advanced colony, really advanced. Colossal structures built into rock-face, chambers enriched with jewels and flowing fountains… Open corridors made of pure gold, adorned with blue sapphires, and voluminous stone courtyards surrounded by wild nature. Life here was intelligent, organized, sophisticated, gilded, dark, and fierce… What remains of this time is at the top of Sri Pada.

When I came to, in feeling like I hadn’t slept, I was completely rested. I joined my father sitting on our balcony and together we watched the clouds coming in and out, circling round Sri Pada from all directions, always maintaining a halo of mist. An enchanting display of nature and legend became one before my eyes… I had so many questions, yet there was something telling me it wasn’t necessary for me to climb to the top… but I allowed my Ego to take the better of me instead…

I don’t know whether it was because I was completely physically unprepared for this, drank way too much water on an undigested stomach, the altitude, or I was being punished for wanting to acquire divine rewards I didn’t need…  but I ended up vomiting the entire way up the mountain.

I was eventually given an Ayurvedic soda to help settle my stomach. So determined to make it to the top, unable to decipher the Sinhalese instructions, I drank half the bottle and wondered how Sri Lankan’s could drink something so awful… They don’t. After another hour of vomiting, I discover that I was only supposed to drink a cap-full, and that we hadn’t even reached the half way point. (Great)

I have never been so sick. Remembering the Chinese proverb: To get through the hardest journey we need take only one step at a time, but we must keep on stepping… I vomited, cried, vomited some more, but I kept on stepping.

I ended up missing most of the sunrise, and when I finally reached the top of the Sri Pada itself, I got electrocuted by the hand rail.

I think you’ll believe me when I say I was really feeling the energy… The electric current ran so strong through my arm, I accidentally passed it along to everyone who shook my hand, including an Irishman’s whose arm was glue to mine for a minute! Turns out, after he had helped a struggling woman carry her child to the top, when he reached the summit of Sri Pada he got electrocuted by the handrail as well (divine rewards indeed)!

Within five minutes we were forced by the crowds to begin our descent, and following a beautiful yet gruelling four-hour climb back down, I proceeded to be sick for the next 12 hours.

Keeping in mind the words of Indries Shah of how “Enlightenment must come little by little, or else it would overwhelm.”…  I’m going to equate the vomiting to spiritual cleansing, and the electric shock as divine intervention 😉

“There are two mistakes one can make along the road to truth… not going all the way, and not starting.”
-Buddha 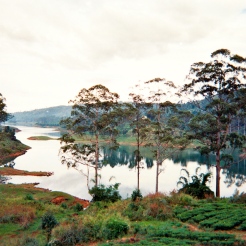 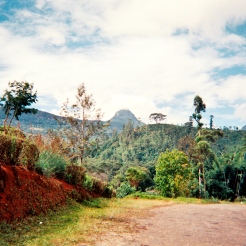 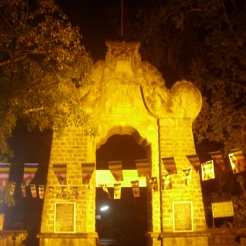 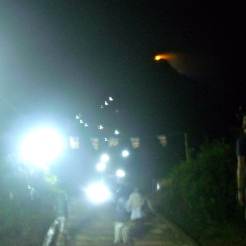 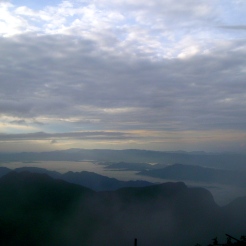 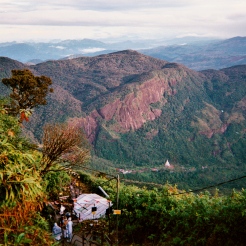 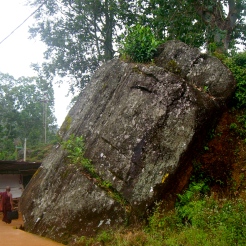 “Peace comes from within. Do not seek it without. “
-Buddha