“…Means a ‘meaningful coincidence’ of outer and inner events that are not themselves causally connected. The emphasis lies on the word ‘meaningful’. ”
~ Marie Louise von Franz~

Following the marked trail up the rock, we arrived at the summit and just like that the trail became steep, rocky, then disappeared. The sacred three. Ending up lost  between insurmountable rocks and hundreds of cacti, it occurred to us that there was just no way we could climb to the top…not without a guide.

Starting to feel disappointed that we had come all this way, we figured that we needed to at least walk around it, so we kept walking… Just as we decided we would turn around, an older man and young lady crossed our paths…

This man looked like he knew what he was doing, so we subtly began following them… (not so subtle apparently), the man turned around and asked us if we were going to the top. Before we could reply he said, “Your going to the top”… and that we were…

It became easier for our guide because now there was four of us instead of two. Working as a team climbing vertical, hanging off colossal rocks, I became terrified and everything started shaking. Our guide told me that I had good shoes on (my Peru shoes), I needed to trust them, the rest was all in my head.

Knowing he was right, that I needed to get over myself… with the help of my Angel, I did exactly that, I got over myself… Sweating, shaking (and a couple of tears later), we made it to the top of Bell Rock, and WOW…

According to our guide,  Bell Rock harbors the masculine energy, which deals with the strength of the self. Strength over the self is about  being able to figure out how to operate ones life in a responsible manner, how to reason without fooling oneself or distorting reality, and how to accurately assess probabilities so that one can anticipate the most likely outcome of any situation one may encounter.

Watching my Angel bouncing off the rocks, from the top of one rock to the next, touching everything that he could-  it suddenly made sense as to why me and my Angel are complete opposites, in every sense of the word, he is the masculine energy, and I the feminine… two birds of the same feather.

As my Angel ran around like a border collie gone wild,  I made two new friends, Peter and Sarah. It was beautiful.

Having officially become members of the “Top of Bell Rock Club”, our guide Peter took a number of photos of us and began telling us his story.

Originally from New York City, Peter trained and practiced as a traditional lawyer for 25 years before finding his niche as the “UFO Lawyer”.  Peter is the only known lawyer, to date, who successfully sued the CIA for the release of over 900 documents relating to UFOs, 57 of which were withheld due to issues of “national security”.

Having been interested for years now in the UFO phenomenon and the governments suppression-cover up of this information, I couldn’t believe this was who our guide was… A man of courage, justice, integrity, and love who for the last twenty years has been standing up for those who have experienced frightening and unexplainable events, giving them a voice in a society where they have been marginalized.

Holding the belief that we are living in a holographic simulation that has been corrupted by a virus, Peter believed that on December 21, 2012, a portal would open at Bell Rock, a portal that he was meant to jump through.

Moving to an apartment right next to Cozy Cactus, Peter was compelled to bring as many people to the top of Bell Rock before 12-21-12. And that he did. When the media caught wind of his claims, a spectacle was created.

When the portal on December 21, 2012 did not open, Peter moved from Bell Rock and soon discovered something he suspected would happen long before… that a new chapter, a new dimension, in his life would open up, only it wouldn’t be at Bell, it would be someplace else… the place we were heading to next…

Nestled in the middle of Rainbow Lane in Magic Land, upon entering his new home that was being shared with the Goddess, I felt exactly what Peter had been describing, so did my Angel…

A portal may not have opened as he had thought it would at Bell, but something most definitely opened up here on Rainbow Lane – the energy here was something else: it was incredible…

“Where are we?!” we thought as we stepped inside (mouths open)… immediately feeling a sense of warmth, openness, love, and peace- Peter was sharing the home with the Goddess incarnate… a visionary artist and shamanic energy healer, Cher Lyn.

Having designed a deck of healing medicine cards based on her art and poetry, Peter asked that I shuffle them so we could each pick out a card, and discover what we were here for.  The card I picked up from the deck was “Innocence” – The Faerie Child

The Faerie Child is asking us to remember our innocence, throw away the ideas that there is no real magic in the world besides a magic trick and a slip of the hand. Chuck those thoughts in our head that “adults” told us about the ways of the world and how we should be, because that’s the way society believes. We only need to remember, we have not lost our innocence it is simply buried in conditioning imposed upon us. Drop all that we have learned from others and we will have returned to innocence. Be as simple-minded as a child, finding the mind no longer tense, innocence resurfaces and we’ll remember to play.

Set your intention and use your child-like essence and trust your feelings. Understand that your awareness may be heightened to that which you may easily sense and sometimes even see their presence. When this happens you may be shown some innate gift that is unique and with it will come a remembrance and a deep calling to contribute your gift to the healing of the planet. The perfect time to bring this gift forth is in our innocence found.

Laugh – See – Love – Feel – Play – Radiate – Express your creative gifts. Enjoy and appreciate the Beauty that is innately natural to you! This will assist to bring Innocence in your world and give you a more Sacred connection to the magic blessing of your existence. Remember Jesus said, “Let the little children come to me, and do not hinder them, for the kingdom of God belongs to such as these. I tell you the truth, anyone who will not receive the kingdom of God like a little child will never enter it.”

The medicine of the Faerie and the dolphin in the painting are urging you to forget those thoughts you have been taught that magic doesn’t really exist, play and allow yourself to return to innocence.

Tears filled my eyes upon reading this… knowing that my angel was not interested in readings, I was in complete awe of his beautiful curious heart as he too picked a card from the deck… “Sister’s Healing- Hale Lehua”

I won’t go into the details of this, the summary is my Angel needs to get back in touch with his feminine side (which is true 😉 ).

Looking at the beautiful soul paintings done by the Goddess incarnate, Cher Lyn, I felt something click… Just as I was leaving for Sedona, I had spoken to my powerful healer friend from Peru, whom has been helping me overcome stress. He has always described the beings/guides that I’m connected to as chiffon-like, colorful, whimsical and faerie-like… He had also told me of a woman who I had to meet, who did soul paintings, her name was Cher… he said that she was slightly reclusive so he couldn’t guarantee that he could get a hold of her, however, if that was something I was meant to stumble upon, he had a feeling I would… Tears filled my eyes again as it occurred to me that I was in her house… there are no coincidences…

Soaking up the magic of Rainbow lane, we left for Red Rock Crossing, and began our hike up to Cathedral Rock…

Halfway up the rock, something strange started happening, something Peter had warned us of. The energy was powerful here, more powerful than at Bell Rock. I became dizzy and began having a series of deja vu… I had been here before, but I hadn’t, but I had… I became completely disoriented… I was so confused yet I remembered… directly after completing the Inca Trail in 2011, I had dreamed of being here, only it was a water park, a playground for Angels… I was so confused…

Upon sitting down to catch our breaths, my Angel confessed to us that he was also having deja vu as well… We all sat in silence as we breathed, drank water, and adjusted to this familiar energetic frequency that had now engulfed us…

Reaching the top, it was breathtaking… there were no words to describe the feeling, it was just meant to be like that- felt…

Along the descent, I stumbled upon a tree which I felt its heartbeat call out to mine, and I needed to hug it. I needed to just hold it for a moment, it felt like I was reuniting with something that was a part of me, a friend.

Walking by where we first started at Red Rock Crossing, my Angel told me that he was feeling something really powerful along the river, he had felt it as we were climbing, but a sense of  disorientation and euphoria came upon him that was much stronger than when we were on top (and yes, we were in the middle of another vortex 😉 ).

When we returned to the house on Rainbow Lane in Magic Land, as we looked at all the photos of the day we discovered that Peter was not only an incredibly gifted photographer, but there were multiple orbs in all of our photos, and our friend ran a karma business! Something I thought only existed in dreams- a portal to another dimension had opened up to all of us on Rainbow lane …

Together with the photos, our guide Peter, the UFO Lawyer, the house of Cher Lyn, the Goddess, the balancing of cosmic energy, becoming members of the Top of Bell Rock Club, and the three heart-shaped rocks I found throughout the day- the signs were everywhere… The day ended over a candle-light dinner at Sedona’s best restaurant, where my Angel and I sat in silence and smiles… Valentines Day is everyday when you are young, and in love 😉

This was quite possibly the most magical day of my life.

“There is no such thing as chance; and what seem to us merest accident springs from the deepest source of destiny.
~ Friedrich Schiller~ 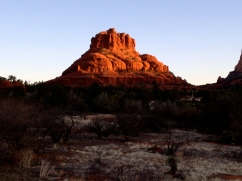 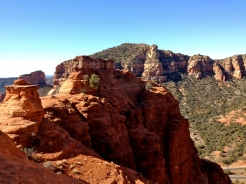 “Sometimes, perhaps, we are allowed to get lost so that we may find the right person to ask directions of.”
~Robert Brault~

Leave a Reply to Rowing Through Life Cancel reply